Thoughts on a Phony Parade

The following email came out today from the fearless Vice President of Public Relations at Northwest College:

You’re invited to a brief groundbreaking ceremony for the college’s new Yellowstone Building next Thursday, May 16, at 4PM at the construction site just west of the tennis courts. An invitation post card was put into your mailbox this morning. As you’ll see, the post card also includes announcement of President Prestwich’s Farewell Reception the day before; more about that event will come to you from Board of Trustees President Mark Westerhold.

I hope you’ll put the groundbreaking ceremony on your calendars and plan to help NWC launch construction of our exciting new instructional building.

After reading this, all I could imagine was that this would be another one of those dull gatherings featuring old, important-people-dressed-in-suits carrying on with a bunch of sterile, gold-plated, one-time-use shovels resulting in another one of those overblown grip-and-grin photo sessions.

Yet, my hope is that this ground-breaking ceremony will result in something less predictable than the above scenario.

I have a couple ideas.

How about a bunch of students with regular shovels doing the actual ground breaking? Any students… whoever wanted to come up and shovel. Perhaps even a Bobcat handy to give the students a “construction thrill.” We can leave the important people in suits on the sidelines. They get paid enough as it is. They need no further recognition.

Could we have a ground-breaking contest? As in, who can shovel off the most sod (measured in square feet) in… say, five minutes.

I don’t know. Honestly I haven’t given it much thought, but I’ve given it a lot more thought than anyone who organizes a phony parade.

I was going to send my suggestion in a “reply all” response, but I have a tendency to get in trouble when I make suggestions like this via a campus-wide email, so I’m subscribing to that “once burned, twice-shy” outlook—and safely posting it here.

Maybe I’m wrong, maybe the ground-breaking ceremony will be something with a little more imagination, but I doubt it. After all, we are talking Northwest College here—a place where we tout originality and creativity, but when it gets right down to it, we fall in line and follow everyone else to justify our institutional direction.

At the risk of being a phony, I may have to attend just to see if I’m wrong. 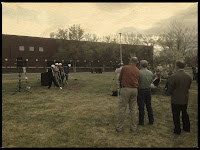 Postscript: As expected the groundbreaking ceremony was ceremoniously unimaginative. Each VIP took turns at the podium to bring the sparse audience to a level of excitement they hadn't experienced since... um, ...maybe lunch that same day. Gold-plated shovels (spray-painted by one of the physical plant employees) were driven into the already-broken ground by the hard-hat wearing VIPs in nice suits (with the exception of the one token student).

Some places such as Browntown are just stuck in that tacky Mad Men era of doing business. Until the dinosaurs in power erode off the scene, they'll always be unimaginative in their PR efforts but like you, I hope we're wrong.