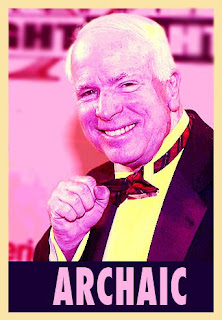 Barack Obama a Muslim? A friend of a known "terrorist" from the 1970s? A long-time member of Rev. Jerimiah Wright's church? He still gets my vote because if we're talking flawed character traits and questionable associations from the past (and present), Barack Obama can't hold a candle to John McCain.

You see "my friends," John McCain has a shady history himself through his various associations over the years—all of which are more documented than the trite scuttlebutt on Obama.

For those of you that can't be bothered, I'll give you the Reader's Digest version of what you probably don't know about John McCain (in case you haven't figured it out by now)... he has ties to the Mob through his in-laws (the Hensleys). Further he has accepted money for his past (and present?) political campaigns from members of the mafia. Former Mafia boss Joe Bonanno, one of the top five Mafia bosses in New York City, invited Senator McCain and Arizona's governor to his birthday party in Tucson, Arizona in 1995. McCain sent a congratulatory telegram back because he was unable to attend. In 2007 McCain also accepted $2,100 in campaign contributions from each of five members of Bonanno's immediate family.

If Obama's a terrorist sympathizer for attending civic-minded board meetings with 1970s anti-war radical Bill Ayers, what's that make McCain in his cozy ties with the mafia?

Most amazing is that none of McCain's dodgy history has surfaced in Obama's campaigning or via the "liberal" media. I find it hard to believe that either entity isn't aware of the senator's Mafia connections.

What else might we learn about John McCain before we cast our votes on November 4?

On two other notes: Regarding foreign relations experience, McCain pundits have continually pointed out that Senator Obama is lacking in this department. Perhaps he is, but millions of Americans have spoken and are obviously confident in his ability when considering those from his own party that he defeated with more experience—including his VP pick, Biden. One has to wonder how well Sarah Palin's candidacy would have fared if she had competed in the Republican primaries from day one.

When discussing taxes and the now-iconic "Joe the Plumber," McCain has singled out Obama's quote regarding "wanting to spread the wealth around." Why is that such a bad thing? I'll gladly have my taxes increase from 36% to 39% when I'm making $250,000 per year... no problem!
Posted by mdt1960 at 12:07 PM